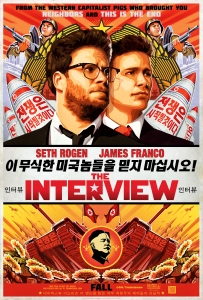 Evan Goldberg and Seth Rogen’s latest film The Interview was bound to get some attention even before its distributor, Sony, was hacked and the ensuing debacle with alleged threats from North Korea (DPRK). A film this racist would get attention regardless. Unfortunately due to the publicity around the Sony hack many more people will likely be subjected to The Interview and the attention won’t be as negative as it deserves. What follows includes spoilers if you believe something already rotten can be spoiled.

The Interview opens with an othering scene of a young North Korean girl singing about destroying the U.S. before an audience of dignitaries prior to a missile launch. The othering completes with a series of shorts news clips about North Korean ruler Kim Jong-un (Randall Park) being the next Hitler before introducing Dave Skylark (James Franco).

We meet Skylark as a tabloid news host interviewing Eminem in a scene that kicks off nearly incessant gay jokes. Skylark is the kind of guy with no qualms about breaking into caricatured Black Vernacular English as ‘comedy’ nor any idea about why anyone would have such qualms. Pressured by producer Aaron Rapaport (co-director Seth Rogen) to due serious journalism, Skylark comes up with the idea of interviewing Kim Jong-un as a bridge. Rapaport will get serious news and Skylark will get sensational ratings.

Rapaport is the sober foil to Skylark’s unfiltered and hyper stream of consciousness. He’s shamed for his tabloid work by a fellow journalism school grad who now works for 60 Minutes. Rapaport’s sophistication is juxtaposed next to Skylark’s visceral racism and sexism. But they both due caricatured Korean accents. They both immediately ogle Agent Lacey’s (Lizzy Caplan) breasts. They both constantly make gay jokes. While Skylark is the dense one, the juxtaposition between he and Rapaport is one of tone only. So when at the end when Skylark says to a puppy, “Guess who’s going home to America where they don’t eat doggies” and Rapaport doesn’t let him finish he is not disapproving, merely hurrying him along.

Sook (Diane Bang) and the North Koreans are introduced with a soundtrack is only slightly less ominous than Darth Vader’s “Imperial March” in Star Wars, just in case they weren’t sufficiently othered earlier. When we meet Sook she is immediately objectified in the familiar way of cinema, with a cut pan up her body. The body pan opens up women’s bodies to the male gaze and orients, or given the aggressive and regressive Dragon Lady stereotyping in this case orientalizes, viewers to objects instead of characters.

Lacey then recruits Rapaport and Skylark in a plot to assassinate Kim. Skylark is convinced to go along with the plan by Lacey’s breasts, bangs and glasses (which are as close as The Interview gets to Lacey’s character development). Any justifications are secondary to Skylark’s pursuit of sex. The rationalizations eventually put forward are concentration camps, a hungry population, a nuclear threat and totalitarianism. These are never explored nor are their reflections in the United States but for Kim quickly stumping Skylark near the film’s climax with a retort about the U.S.’s mass incarceration regime.

The only character with any depth is Park’s Kim. He is a vulnerable tyrant with daddy issues and the initial portrayal is only half-bad. But as the film goes along any charisma or depth gets strained out of the narrative. As the final confrontation kicks off and assassinating Kim gets underway the film moves from boring to boring and bloody with the othered North Koreans being mowed down à la Rambo and similar Cold War tripe about evil Asians. The White Hero Skylark rousing North Koreans to rise against Kim is as ridiculous as the Russians chanting “Rocky! Rocky!” at the end of Rocky IV. Indeed Reagan-era Hollywood is where The Interview’s heart is. It aspires to be a Cold War buddy comedy and even offers the Scorpians’ “Wind of Change” as the credits roll.

Rogen and Goldberg’s idea of humor is something like “wacky” combined with racism, gay jokes and an obsession with anuses and inserting things into them. They do not contact a DPRK embassy to set up the interview, instead a wacky path including the Olympic Committee and a Rapaport trip to China ensues. There is a wacky drone strike that kills a tiger. Rapaport is wackily racist to the DPRK official on the phone. Ad infinitum.

The Interview has virtually no character development but plenty of overacting. It has a few quick montages – some with short clips some with jump cuts – that serve no purpose. It is aggressively sexist, homophobic and racist. The Interview is a comedy without any. I did chuckle once during a fight scene near the end of the movie. Rapaport is fighting a television worker who bites off one of his fingers. Then Rapaport bites off one of the other guy’s fingers. Then the guy bites off another of Rapaport’s fingers. That third one was a little funny.

Despite all of this The Interview has already found an audience. In addition to Seth Rogen’s dedicated following of people who think “Because I Got High” was robbed at the Grammys, U.S. nationalists are also up in arms about Sony’s pause on distribution. The nationalists are presenting The Interview as something to do with free artistic expression or fighting oppression. Not incidentally, neither of these audiences is up in arms about the multitude of racist emails released by the hackers nor about how vigilantes or cops kill Black women and men every twenty-eight hours. It has nothing to do with free artistic expression. Free expression does not mean an obligated audience and The Interview has not earned one.

Not distributing The Interview was both ethically and artistically the right decision but Sony has gone ahead with it anyway. Don’t see it. For the $6 Sony is charging to stream it you can find better ways to spend two deeply unpleasant hours. You could buy two bottles of soy sauce and drink them slowly. You could buy a roll of industrial tape and use it to remove body hair. You could buy a gallon of bland ice cream and see how long you can sustain brain freeze. All of these are better than watching The Interview.