AK Press in 2009 published James Horrox’s A Living Revolution: Anarchism in the Kibbutz Movement, an examination of European anarchism’s influences on Zionist settler colonialism in Palestine that aspires to locate anarchism in Israeli kibbutzim. His efforts instead expose failures of the European Left canons, a misstep from a respected Left publisher, and a willingness to embrace colonial violence and anti-semitism if it can be read as vaguely anarchistic. 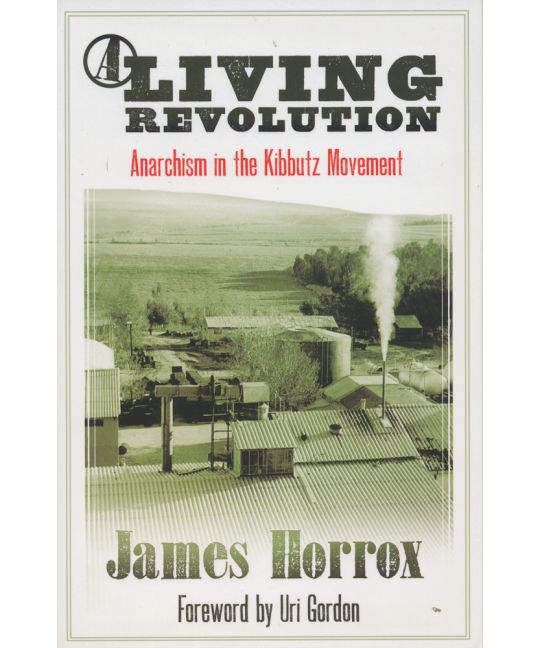 Horrox’s text contains numerous factual errors as when he writes that Bar Giora “grew out of an organization known as the Hashomer” (p.20) and not the other way around. These inaccuracies are less a problem than how Horrox immediately follows writing Hashomer’s “members were, from an early stage, ‘motivated by a conviction that the commune was the best way of life for themselves and their families.’ The group developed an ‘alternative model based upon cooperative settlement,’” (p.20) without noting Hashomer’s primary motivation was establishing settler relations of force to create a racialized labor caste of colony guards. Their idea of a “commune” was explicitly defined as one without Palestinians. Horrox’s idealized spaces are mini settler sovereignties created through and in order to extend ethnic cleansing.

Horrox notes in the introduction that “Many see the kibbutz’s very existence as predicated on the forcible displacement and subjugation of the region’s native Arab population, and would consider any progressive ideals of equality and social justice that the kibbutzim profess to hold nullified by the massive inequality on which the practical manifestation of these ideals has come to be based,” [emphases in original] (p.8-9). He immediately dismisses the harm kibbutzim enact writing, “Throughout history, all projects attempting to self-organize have been caught in different types of power networks that have complicated their existence. The kibbutz is no different,” (p.9). Horrox doesn’t elucidate which projects he is talking about but surely not all of them create the “power networks” that othered populations are then “caught in”.

It’s telling that Horrox cites Gershon Shafir’s 2002 work (with Yoav Peled) Being Israeli but not his celebrated 1989 text Land, Labor and the Origins of the Israeli-Palestinian Conflict that directly contradicts Horrox’s thesis about socialist ideologies being the driving factors in the Zionist settler colonial forms of the kibbutz and moshav. Horrox contradicts himself, seemingly without knowing, throughout the text on this. “In 1909, a strike broke out when Kinneret’s Jewish workers decided they could no longer put up with the oppressive, arbitrary administration,” which sounds like something we hope anarchists would do. The sentence continues, “and the use of hired Arab labor,” (p.17). Oops. Doesn’t seem so anarchistic now. Settlers refusing to share the same labor fields as Palestinians is the point of Avoda Ivrit (Hebrew labor). Because Palestinian laborers had lower costs of living due to kinship networks, subsistence farming and, especially, because large landowners and agricultural interests already exploited Palestinian labor and depressed their wages, Jewish settlers could not compete with Palestinian labor. Instead of organizing alongside Palestinian laborers fighting exploitation, non-Palestinian Jews cooperated to exclude Palestinians from labor fields to increase their bargaining power by creating exclusive labor castes. Separation was the goal, not cooperation. Horrox even quotes Nachman Syrkin on this but finds different meaning. “In the planned cooperative settlement, the question of Jewish labor will find a solution, because the main problem, that of labor and capital, will be solved,” (p.16).

Separation as the source of settler labor prosperity is the topic of an influential thesis by Chaim Arlosoroff, a major Labor Zionism intellectual who Horrox cites throughout the text as an anarchist figure and thinker. Arlosoroff’s 1926 essay “On the Question of Joint Organization” argues for Zionists to follow South African settlers’ Color Bar – later termed apartheid – programs of labor separation instead of struggling jointly with Palestinians laborers on the railways, post offices and other British colonial infrastructures. Arlosoroff writes that wherever Jewish settlers labor in Palestine, they do so “in the shadow of cheap Arab labor,” a “primitive rival” whose “needs are little more than zero.” Arlosoroff both naturalizes the pre-Zionism exploitation of Palestinian workers while justifying settlers displacing them. For all of Horrox’s waxing about how Gustav Landauer and Pyotr Kropotkin – both of whom opposed Zionism – heavily influenced Arlosoroff, A.D. Gordon and others, he fails to note that the Second and Third Aliya settlers he idolizes aimed for, in their own terms, the “conquest of land” and not the “conquest of bread.” Zionists sought to enclose the land from the indigenous Palestinian peasantry. Claiming anarchism or not, this is an enclosure, not a creation of commons. This is the narrative gap Horrox constructs when noting the excitement over “workers cultivating publicly-owned land” (p.19) while not mentioning that Palestinians are neither the “workers” nor the “public” in that sentence despite being the vast majority of Palestine’s pre-Nakba population.

As a Living Revolution continues its major conflict is not settlers espousing anarchism while dispossessing Palestinians but settlers espousing anarchism losing ground to settlers espousing Marxism in Zionist discourse and colonization. Instead of the common Colonizer Left trope of the revolutionaries and capitalists fighting for control over colonial plunder, Horrox has sects of a Colonizer Left fighting for the ability to guide colonial plunder. This is more akin to how Budour Hassan finds many anarchists fetishizing the “Republicans of the Spanish Revolution [while neglecting] Spanish colonialism in North Africa.”

Horrox reproduces another oppressive formation in endorsing European anti-semitic ideas of Jewish degredation. Horrox writes of Zionism as the “reconstruction of an entire people,” the “Jewish renaissance” (p.2), a “national revival” (p.13) and “regeneration” (p.25). But what is wrong with we Jews that requires “renaissance”, “regeneration” or “revival”? Anti-semitism presupposes that something is wrong with Jews and this is evident in the writings Horrox cites as well as his own text. Horrox spends copious pages on A.D. Gordon as an anarchist. Ze’ev Sternhell, whose The Founding Myths of Israel Horrox cites only to ignore, quotes Gordon writing that Jews are “broken and crushed … sick and diseased in body and soul.” That “we are a parasitic people. We have no roots in the soil; there is no ground beneath our feet. And we are parasites not only in an economic sense but in spirit, in thought, in poetry, in literature, and in our virtues, our ideals, our higher human aspirations. Every alien movement sweeps us along, every wind in the world carries us. We in ourselves are almost nonexistent, so of course we are nothing in the eyes of other peoples either.” Horrox slightly cleans up this crude anti-semitism in one of the brief moments he even mentions Palestinians in the text writing that Gordon was “anything but naive about Arab resistance to Zionism, which he viewed as a perfectly understandable reaction to Jews’ westernized and rootless lifestyle,” (p.27). This and Horrox writing that his anarchist settlers “felt that the First Aliya Jews had succeeded merely in replicating the exploitative socio-economic structure of the Pale of Settlement, where Jews worked in clean jobs, far from the point of production, and relied on other groups to do the so-called dirty work,” (p.17). Either Horrox doesn’t understand that Zionism’s “New Jews” are an anti-semitic idea or he’s ok with the anti-semitsm. It’s an explicitly anti-semitic text either way.

Colonial violence and anti-semitism are foundational to European fascism so it makes horrible sense that Horrox celebrates the white supremacist eugenicist Arthur Ruppin and the early Revisionist Zionist Josef Trumpeldor. He mines their work for anarchist influences in the same way that Jacobin recently printed a hagiography for fascist Eduard Limonov. These decontextualized, highly selective readings do nothing to expand the reach of liberation movements but instead attempt to rehabilitate fascism, colonialism and ethnic cleansing and pretend they are not oppression. This mining has more in common with the Israeli military using Derrida, Deleuze and Gautari to plan attacks on Palestinians than it does anything remotely progressive.

Could this mess have been avoided? Horrox describes “anarchism’s social vision” at the beginning of the book and begins with Pierre-Joseph Proudhon who promoted genociding Europe’s Jews as part of his political philosophy. At least 150 years before Proudhon was born, and 200 years before A.D. Gordon, kidnapped Africans in Jamaica had already secured their freedom and established agricultural communities in the Blue Mountains in opposition to African Slavery and capitalist agricultural exploitation. Three years before Marx was born Black fighters at Negro Fort inside Seminole sovereignty raided southern Georgia for supplies and to free kin in direct opposition to the US settler slaver empire. Where are these communes in Horrox’s canon? Why are settler colonial geographies like the agricultural kibbutzim in the canon but the anti-colonial fugitive agricultural communes established in the Great Dismal Swamp ignored? The works Saidiya Hartman, Fred Moten, Zoé Samudzi and William C. Anderson, Marquis Bey and others are doing conceive resistance lineages and practices that do not need to do like Horrox with the kibbutzim or Jacobin with Limonov and try to crop out the horror to create the image of revolution. Instead they create and learn from resistance lineages established in opposition to capitalist, colonialist, anti-Black systems.

The latter two examples, Samudzi & Anderson and Bey, I note above are also published by AK Press the same as A Living Revolution which remains in AK’s catalogue. A few years back investigators showed that one of AK’s authors, Michael Schmidt, was espousing white nationalism under the rubrick of anarchism and AK reacted swiftly to cease publishing Schmidt’s works and remove him from their catalogue. They should do the same with A Living Revolution. Thanks for reading.